Skip to content
Home / Legal Explainers / Crimes & Violence / Violence & Abuse / Acid Attack / What are the rights a person has under this law?

What are the rights a person has under this law?

[Trigger Warning: The following content contains information on physical violence which some readers may find disturbing.]

Survivors of acid attacks have the following rights under the law: 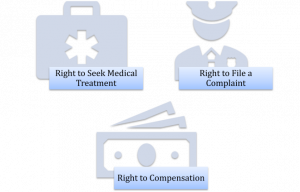 A survivor of an acid attack has the right to seek medical treatment in both government and private hospitals. The Supreme Court issued guidelines for acid attack crimes where they said that:

The court has placed the responsibility for the treatment and rehabilitation of survivors on the state government.2 Additionally, it has expected states and union territories to take action against hospitals that refuse to treat acid attack survivors.1

Right to File a Complaint

Acid attack survivors also have the right to file a complaint against the perpetrator. The complaint can also be filed by the survivor’s relative, friend or acquaintance, any person who has witnessed the crime, or any person who comes to know of the crime. To see a list of other persons who can file the complaint, see here.

Acid attack survivors have the right to seek compensation from the state government. The Victims Compensation Scheme3 that was drafted by the National Legal Services Authority, was approved by the Supreme Court in 2018. It provides for mandatory compensation for survivors of acid attacks as well as sexual crimes including sexual assault, murder, kidnapping etc. Apart from compensation under this scheme, the survivor receives the fine amount that the perpetrator pays for committing the crime which is charged by the Court.4

Various state governments have formed Victim Compensation Schemes for acid attack survivors. Keeping in mind that there is a lack of uniformity in the state schemes, and the amount of compensation specified in most of these schemes is too low, the Supreme Court stated that:

To learn more on information on schemes in different states for survivors of violence, contact details of one-stop centres, protection officers and helpline numbers, check out the Nyaaya Map on Key Information for Survivors of Violence.

Given below are the list of State Victim Compensation Schemes in India:

How is the sale of acid regulated in India?

The sale of acid in India is governed by two levels of regulatory mechanisms, that is, State level rules and Supreme Court rules.

What is Acid Attack?

An acid attack is the crime of hurting a person by throwing acid on them, administering acid to that person or doing anything with acid with the intention or knowledge that it would harm the person.

What are the offences and punishments under this law?

The crimes relating to acid attacks have been specified under the Indian Penal Code, 1860 and the Code of Criminal Procedure, 1973. Anyone can be punished for the crimes given below regardless of their gender.

What are the complaint forums/helplines?

If you are a survivor of acid attack, you can approach the police, NCW, Sub-divisional Magistrate or any of the National Helplines mentioned herein.

Who does the law protect?

The law on acid attack protects all persons, regardless of their gender. Further, there are no specifications in the law in terms of the age of the survivor.

How do you file a complaint?

The legal process following an acid attack includes, filing an FIR, police investigation and filing of charge sheet, after which the trial begins.