CHAMPIONING LEGAL AWARENESS AMONG THE UNDERSERVED

India is speeding ahead in technology, the startup industry is booming with incoming foriegn investments and the urban population is dreaming of a new India. A new India where electric vehicles ensure a clean environment, digital money becomes an asset and drones become enablers for taking the agritech industry to new heights. 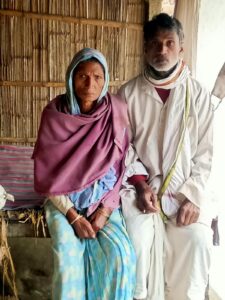 But our dream will remain fragmented unless we take along people like Rajkumar Chaurasia, living in a village in Samastipur district of Bihar. He had been fighting for Rs 5,000 of widow pension for his 83 year old mother for the last 1.5 years. Burdened by growing medical bills and being acutely aware of his illiteracy, Rajkumarji almost let go of his mother’s widow pension until he heard of Nyaaya & Gram Vaani’s initiative Meri Bhi Awaaz Suno. A simple dial-in of number 3 on his not-so smart phone helped him find the right way to make the district bank manager an ally to claim his mother’s pension. This Rs 5,000/- which may get spent easily in a day or two in our cities makes a huge difference in a small village of Bihar.

Image: Rajkumar Chaurasia with his mother at their house

Rajkumarji is not alone. There are 180 such villagers in just his small community who had not known how to avail of their Widow pension. His story now serves as an inspiration for these 180 and thousands of more villagers in various districts of Bihar, Jharkhand, UP and MP.

The Government of India passes various laws and issues various schemes and policies for different sections of the Indian population every year. Each scheme focuses on solving a specific problem to improve the quality of living among Indians, especially the ones who are underserved in India due to economic, educational or other financial challenges.

These schemes, however, fail to reach the right audience because of lack of awareness and complicated process in which the benefits can be availed. Legal information is filled with jargon which makes it more difficult to understand, even if it is made available in the regional language. As a result, many people cannot avail of the benefits from the schemes meant for them. 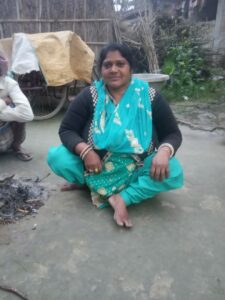 Usha Kumari’s challenge as a person with disability knows no bounds. Her financial burden had some relief due to Bihar’s Viklang Pension Yojna. Without any prior notice or information Usha Kumari stopped receiving her pension and helplessly kept waiting for 3-4 months until she heard #MeriBhiAwaaz over community radio Mobile Vaani. She reached out to voice her concern and was put in touch with the local Vikas Mitra who then assisted her in completing the necessary paperwork to expedite the disbursal of her pensions. Her pension started flowing in again and she can now feel assured about a fixed amount to come in every month for her expenditures.

Image: Usha Kumari outside her house her  village in Samastipur district

ROUTE TO BUILD AN EQUITABLE INDIA

Rajkumariji and Usha Kumariji are just two beneficiaries from hundreds of success stories that are getting created every day as more people are dialling in to Mobile Vaani to access their rights. This pilot initiative in Samastipur district is now a proven framework which helped in successfully creating awareness around schemes like Widow Pension, Old Age Pension, Disability Pension, National Pension Schemes, One Nation One Ration card and e-Shram card.

The bigger vision of an equitable society in terms of justice dreamt by Nyaaya’s team of lawyers will come to reality when we are able to tie up with more grassroots enterprises like Gram Vaani. The journey may be long but these successful initiatives help us believe we can make “Justice Accessible to All” and bring real impact in the lives of underserved and marginalized Indians.

As the Covid pandemic hit, the world soon realised that its effects were not limited to medical ailments, but went beyond to legal issues as well. Be it in terms of understanding your right to receive dignified healthcare to matters of probating a will on the death of a loved one or even your rights […]
Read More >

Campaigning: Do’s and Don’ts for Candidates in India

The Model Code of Conduct (MCC) is a set of rules and guidelines which regulate the actions of the political parties, candidates, people supporting them, the civil servants during election time and anybody else who is associated with elections. The MCC ensures that the elections are held on fair grounds, and no action is taken […]
Read More >

Domestic Violence during Lockdown: Dealing with the Shadow Pandemic

A UN report has recently analysed the impact of COVID-19 on women, urging nation-states to include prevention of violence against women and girls as a part of their COVID-19 action plan.11 With a sharp increase in domestic violence cases across the world, Phumzile Mlambo-Ngcuka, Executive Director of UN Women, has termed this increase in […]
Read More >

The advent of technology has led to new forms of harassment at workplaces. It is important to understand the POSH law (The Sexual Harassment of Women at Workplace (Prevention, Prohibition and Redressal) Act, 2013) at this juncture to protect yourself from any form of sexual harassment while working from home. In 2019, a survey by […]
Read More >

For Manual Scavengers, Swachhta is not Seva

Another anniversary of the Swachh Bharat Abhiyan (hereinafter “SBA”) is approaching and “Swachhta Hee Sewa” is in the air. The Government has purportedly been very sincere in its efforts to promote the nation-wide cleanliness campaign. But if you look beyond the endorsements from celebs and the photo-ops of ministers cleaning areas which have been cleaned […]
Read More >

Dowry related crimes continue to rise even after 59 years of Dowry Prohibition Act: What are the reasons for this?

Dowry has been defined as anything with value being given from one party of marriage to the other as a condition for the marriage to take place. The Dowry Prohibition Act passed in 1961 declares that giving or accepting dowry is illegal. It also punishes the people who are involved, who help and facilitate the […]
Read More >

Mumbai, the city of dreams, is not just a city for the rich and affluent but caters to every person that walks its streets. While walking the streets of the city, one encounters a colourful array of street vendor stalls. These stalls sell basic items like fruits and vegetables to items in high demand like […]
Read More >

Chhota Rajan, Vijay Mallya, Lalit Modi, Bannanje Raja – What is the common factor that links these high-profile individuals? They are all people who fled from India to foreign countries after committing crimes in our country. These are only a few names among thousands who attempt to escape justice by going out of the country. […]
Read More >

Environment Law and Policies in India: A Historical Overview

“People are suffering. People are dying. Entire ecosystems are collapsing. We are in the beginning of a mass extinction, and all you can talk about is money and fairy tales of eternal economic growth. How dare you!” These are the words of a Swedish teen activist that created a global uproar. Until this point, there […]
Read More >

Why simplifying the law is important in India

Rukmini, lives in Delhi and works at a bank. She has been married for three years and is constantly taunted by her husband and his family, who want her to quit her job and be a housewife. She enjoys her work and is adept it but she feels distressed from the snide comments from […]
Read More >

The worldwide pandemic and almost six months of being trapped inside houses have made us realise the value of the essential workers who provide for the daily needs in our community. For most of us, it is a time to take rest, remain inside the house with all comforts and luxuries, avoiding outside contact as […]
Read More >

When such a critical multi-stakeholder Government response has to be taken for epidemics, the two primary laws which come into play are the Epidemic Diseases Act, 1897 and the Disaster Management Act, 2005. To read more on the laws, see here.   Let’s see what the latest updates are on how the law is […]
Read More >